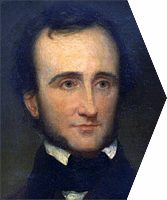 [The above was addressed to the poet’s mother-in-law, Mrs. Clemm—Ed.]