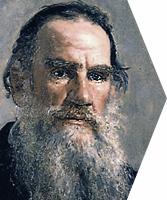 Home → Leo Tolstoy → The Two Brothers and the Gold

The Two Brothers and the Gold. Leo Tolstoy

Once upon a time, in the days long since gone by, there dwelt at Jerusalem two brothers; the name of the elder was Athanasius, the name of the younger John. They dwelt on a hill not far from the town, and lived upon what people gave to them. Every day the brothers went out to work. They worked not for themselves, but for the poor. Wherever the overworked, the sick were to be found-wherever there were widows and orphans, thither went the brothers, and there they worked and spent their time, taking no payment. Thus the brothers went about separately the whole week, and only met together in the evening of the Sabbath at their own dwelling. Only on Sunday did they remain at home, praying and conversing together. And the Angel of the Lord came down to them and blessed them. On the Monday they separated again, each going his own way. Thus did the brothers live for many years, and every week the Angel of the Lord came down to them and blessed them.

One Monday, when the brothers had gone forth to work, and had parted their several ways, the elder brother, Athanasius, felt sorry at having had to part from his beloved brother, and he stood still and glanced after him. John was walking with bent head, and he did not look back. But suddenly John also stopped as if he perceived something and continued to gaze fixedly at it. Presently he drew near to that which he had been looking upon, and then suddenly leaped aside, and, not stopping for another instant, ran towards the mountain and up the mountain, right away from the place, just as if some savage beast were pursuing him. Athanasius was astonished, and turned back to the place to find out what his brother had been so afraid of. At last he approached the spot, and then he saw something glistening in the sun. He drew nearer-on the grass, as if poured out from a measure, lay a heap of gold. And Athanasius was still more astonished, both at the sight of the gold and at the leaping aside of his brother.

"What was he afraid of, and what did he run away from?" thought Athanasius. "There is no sin in gold, sin is in man. You may do ill with gold, but you may also do good. How many widows and orphans might not be fed therewith, how many naked ones might not be clothed, how many poor and sick might not be cared for and cured by means of this gold? Now, indeed, we minister to people, but our ministration is but little, because our power is small, and with this gold we might minister to people much more than we do now." Thus thought Athanasius, and would have said so to his brother, but John was by this time out of hearing, and looked no bigger than a cockchafer on the further mountain.

And Athanasius took off his garment, shovelled as much gold into it as he was able to carry, threw it over his shoulder, and went into the town. He went to an inn, gave the gold to the innkeeper, and then went off to fetch the rest of it And when he had brought in all the gold he went to the merchants, bought land in that town, bought stones, wood, hired labourers, and set about building three houses. And Athanasius abode in the town three months, and built the three houses in that town; one of the houses was an asylum for widows and orphans, the second house was a hospital for the sick, the third house was a hospice for the poor and for pilgrims. And Athanasius sought him out three God-fearing elders, and the first elder he placed over the refuge, the second over the hospital, and the third over the hospice for pilgrims. And Athanasius had three thousand gold pieces still left. And he gave a thousand to each of the elders that they might have wherewith to distribute among the poor. And all three houses began to be filled with people, and the people began to praise Athanasius for all that he had done. And Athanasius rejoiced thereat, so that he had no desire to depart from the town. But Athanasius loved his brother, and, taking leave of the people, and not keeping for himself a single coin of all this money, he went back to his dwelling in the selfsame old garment in which he had come to town.

Athanasius was drawing near to his mountain, and he thought to himself: "My brother judged wrongly when he leaped aside from the gold and ran away from it. Haven′t I done much better?"

And Athanasius had no sooner thought this than suddenly he beheld standing in his path the Angel who had been sent to bless them, but now looked threateningly upon him. And Athanasius was aghast and could only say:

"Wherefore, my Lord?"
And the Angel opened his mouth and said:
"Depart from hence! Thou art not worthy to dwell with thy brother. That one leap aside of thy brother′s was worth more than all that thou hast done with thy gold."

And the Angel said to him:
"That same Devil who placed the gold there in order to corrupt thee, hath also put these big words into thy mouth.

And then the conscience of Athanasius upbraided him, and he understood that what he had done was not done for God, and he wept and began to repent.

Then the Angel stepped aside from the road, and left free for him the path in which John was already standing awaiting his brother. And from thenceforth Athanasius yielded no more to the wiles of the Devil who had strewn the gold in his path, and he understood that not by gold, but by good works only, could he render service to God and his fellow-man.

And the brethren dwelt together as before.