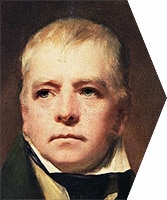 The interchange of a cuff with the jolly priest is not entirely out of character with Richard I., if romances read him aright. In the very curious romance on the subject of his adventures in the Holy Land, and his return from thence, it is recorded how he exchanged a pugilistic favour of this nature, while a prisoner in Germany. His opponent was the son of his principal warder, and was so imprudent as to give the challenge to this barter of buffets. The King stood forth like a true man, and received a blow which staggered him. In requital, having previously waxed his hand, a practice unknown, I believe, to the gentlemen of the modern fancy, he returned the box on the ear with such interest as to kill his antagonist on the spot.—See, in Ellis′s Specimens of English Romance, that of Coeur-de-Lion.